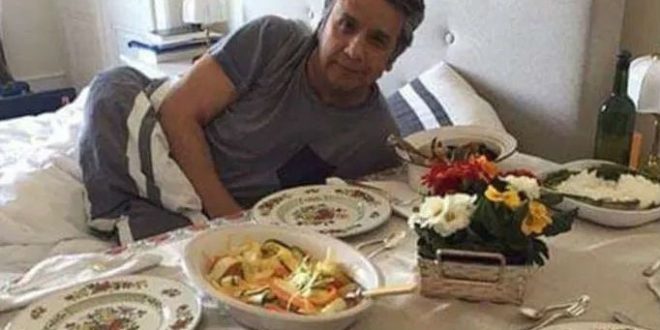 This photo got Julian Assange kicked out of Ecuadorian embassy

This is the photo that reportedly got Julian Assange kicked out of the Ecuadorian embassy. The image shows Ecuadorian President Lenin Moreno in a gray t-shirt, smiling as he reclines in a luxury hotel bed with a large platter of lobster. The picture caused uproar in the South American country since it shows the president taking it easy as austerity measures were imposed on his people.

It was part of a trove of damaging documents and photos that Moreno, 66, accused WikiLeaks of leaking.

The president reportedly finally decided to kick the WikiLeaks founder out of his country’s embassy in London last week after getting wind of the plot to blackmail him with the documents.

“The president is a very calm person,” said a senior official, who was involved in the embassy raid’s coordination. “But when he gets angry he can be very determined.”