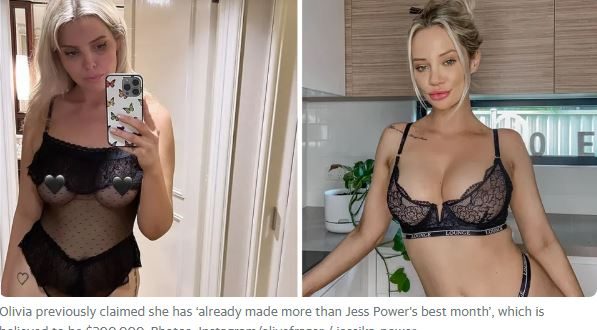 Just over a month after joining OnlyFans, Married At First Sight star Olivia Frazer has revealed her impressive ranking on the adult subscription-based website.

The 29-year-old, who previously shared that she had earned a whopping $10,000 in her first 12 hours on the platform, took to Instagram on Saturday to announce that she is in the top 0.01 per cent of all creators. 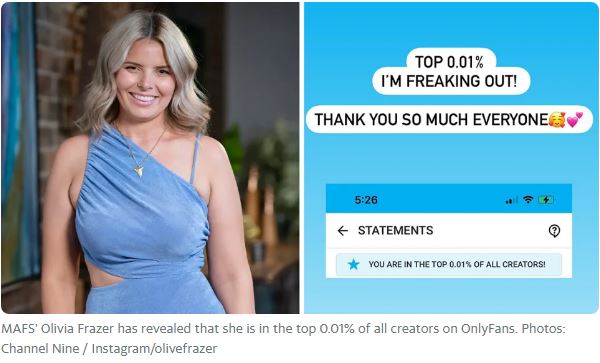 “I’m freaking out!” she wrote on her story alongside a screenshot of the achievement and a link to her profile.

“Thank you so much everyone.”

Olivia’s post comes just a few days after she made headlines for comparing her earnings to fellow reality TV star and content creator Jessika Power.

Speaking to So Dramatic!, Olivia claimed that she has “already made more than Jess Power’s best month”, which is believed to be $200,000.

However, she later took to her Instagram Story to slam certain publications who reported that she and Jessika were now in an “OnlyFans war”.

“THIS is disgusting,” she said. “I’m not at ‘WAR’ with anyone. I was using Jess’s success as a reference point because it’s very well known that she is smashing it.

“Forgive me for hoping that my success (that I’m incredibly excited about) might be celebrated too. NOTHING ELSE. There was nothing else to it. STOP PITTING WOMEN AGAINST EACH OTHER. It’s revolting and I’m sick of it.” 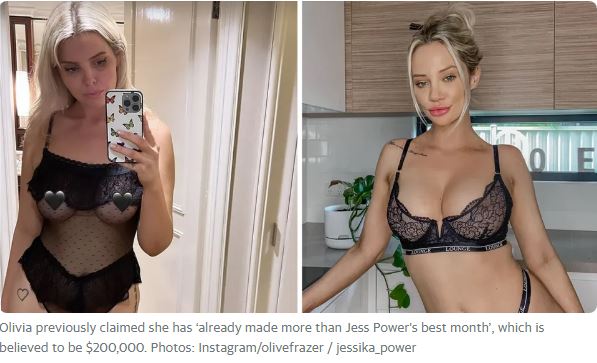 Jessika ended up responding to the controversy and questioned how Olivia would know how much she has earned.

“I don’t even like talking about the money I’ve earned or to compare it to anybody else. It’s just not what you do,” she told So Dramatic!.

“It’s completely normal to earn a large amount of fast cash when starting OnlyFans. Especially coming off of one of Australia’s biggest reality TV shows.”

In The Wash’s documentary ‘Jessika Power: Unfiltered’ earlier this month, the Big Brother VIP star opened up about how the X-rated website has changed her life.

“I never thought I’d see the money I have in my bank account ever in my life,” she said.

“Little old Jess who’s come from a mother who had drug abuse, then I had ex-boyfriends who abused me, an ex-boyfriend who committed suicide, went through a s**t relationship on MAFS, got broken up with on live TV, absolutely criticised by the whole world. And now here I am, flying first class all around the world.”

Jessika, who shot to fame on season six of MAFS in 2019, joined OnlyFans in August last year and raked in $50,000 in her first five days on the platform.

Previous ‘I know what your initial reaction may be…’: Canadian influencer’s powerful post
Next Olivia Frazer shocks with X-rated secrets: ‘Sex tape disaster’