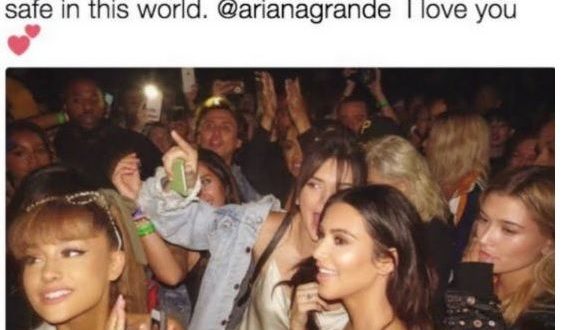 Kim Kardashian was roasted by fans over a ‘narcissistic’ tweet she posted in the wake of the Manchester terror attack.

Like many stars from the world of showbiz, the reality star had attempted to offer words of support and rally around ‘broken’ Ariana Grande whose concert descended into a massacre after suicide bomber Salman Abedi detonated a bomb in the crowded foyer of the Manchester Arena, just moments after she closed the show. The terror attack left 22 dead, some of them children, and a further 64 injured.

RELATED:  Kim Kardashian wore a dress printed with her own face

Taking to Twitter, Kardashian paid a personal tribute wrote: “Concerts are supposed to be a place where u can let loose & have fun. So scary to not feel safe in this world. @arianagrande I love you.”

With the post came a photo of her on a night out with pal Grande and her younger sister Kendall Jenner. Fans couldn’t help but point out the “inappropriate” picture.

One vowed: “We’re never going to forget when you posted an inappropriate pic and made the Manchester bombing all about you. (Screenshots are forever).”

The criticism on social media continued with others questioning why she would use a picture of herself to pay respects.

The Keeping Up With The Kardashians star has since deleted the post. 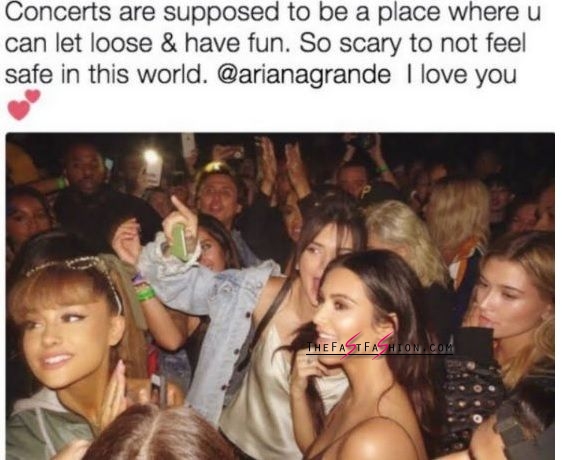 Before deciding to share the offending snap Kardashian had tweeted her fears for the victims. She told her 52.5m followers: “I can’t imagine the fear and agony these parents must be going through searching for their kids. I’m praying for everyone in Manchester. This is truly so senseless & heart breaking.”

RELATED:  Kim Kardashian Feels 'So Left Out' as Her Sisters Rock All Burgundy Looks

Although Grande has yet to release an official statement on the remaining European dates of her The Dangerous Woman Tour, shortly after the atrocity the she shared a message on Twitter saying she was “broken”, telling fans that she had no words for the events that had transpired.