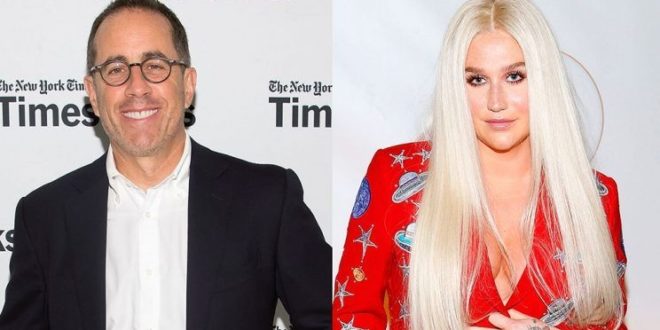 Jerry Seinfeld Explains Why He Refused to Hug Kesha: ‘You Don’t Hug a Total Stranger’

In a new interview, Jerry Seinfeld stands by his decision to turn Kesha down cold for a hug — three times!

The comedian unintentionally got people laughing this week by refusing a hug from Kesha on the red carpet at A Night of Laughter and Song at the Kennedy Center in Washington, D.C., Monday. He was giving an interview when the “Tik Tok” singer broke in, and, well, by now you (and all your Twitter friends) know what happened.

He added, “I was right in the middle of an interview, it was a little off.”

Besides that, Seinfeld said he’s not one to give hugs lightly, as anyone who watched Seinfeld knows. And certainly not to “total strangers.” (At the time of Hug-gate 2017, Seinfeld told his interviewer, “I don’t know who that was.” Kesha fans did not appreciate that.)

“When you get to be my age and you’ve done a couple things, you have your own reality,” Seinfeld said. “In my reality … I don’t hug a total stranger. I have to meet someone, say hello. I gotta start somewhere. Hug isn’t first moment of a human, two humans. I never did that.”

Seinfeld gets it that people might think they know him after watching him on TV, but still.

“I’m so flattered by that, but the TV only works one way. I can’t see who’s watching.”

In his defense, that appears to be true.

Seinfeld also noted that once he and Kesha had a proper introduction inside the D.C. event, they had a moment.

“She was very nice about it, we laughed about it,” the Comedians in Cars Getting Coffee star revealed.

But they did not hug it out.