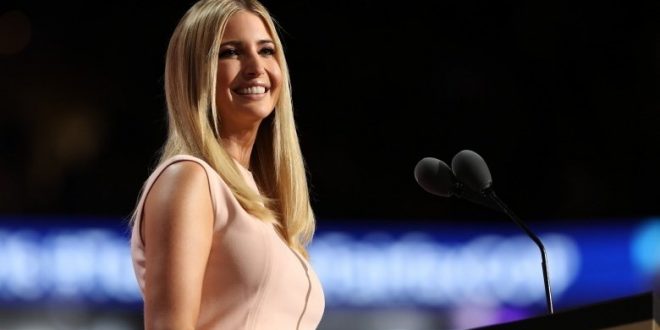 Ivanka Trump, daughter of President Donald Trump, has had quite the life of her own, both professionally and personally. No stranger to the fashion world, Ivanka began modeling in her early teens, appearing everywhere from the cover of Seventeen to the Versace runway.

Since then, Ivanka’s displayed a remarkable transformation from heiress to fashion designer, businesswoman, wife, and mother and two-time published author. No matter what you might think of her father, there’s no denying that Ivanka Trump has both the fashion and business sense to carry her far in her own right. 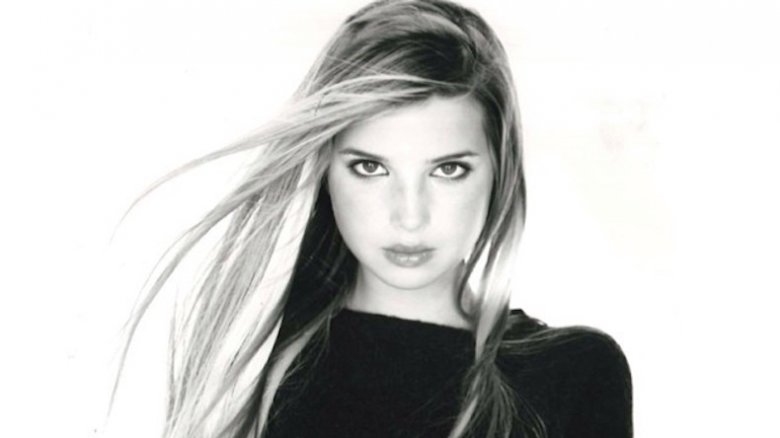 When Ivanka was 15 years old, she transferred from the Chapin day school in NYC to Choate Rosemary Hall, a boarding school in Wallingford, CT. The change wasn’t easy. “I was all of a sudden in the prison of boarding-school life, and all my friends in New York were having fun,” she told Marie Claire. She started modeling shortly after she transferred to Choate, but she told Town and Country, “I had no interest in being a model. I just wanted to get the hell out of 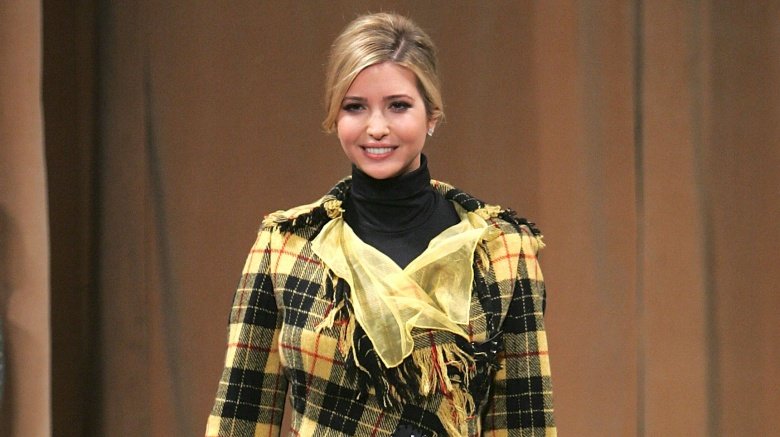 Ivanka signed with Elite Model Management and the then-dirty blonde 14-year old sprang into the modeling world. Her father told VH1, “She walks into a room and everybody just falls off their seats. I mean, she’s really special.” Her early career included a spread in Elle and Tommy Hilfiger ads, before landing the cover of Seventeen in 1997.

Her modeling career didn’t stop at magazines. She walked runway fashion shows and co-hosted the Miss Teen USA pageant in 1997. Even though her modeling career was hot, she wasn’t ready to make a long term career out of it. In fact, she went on to further her studies. 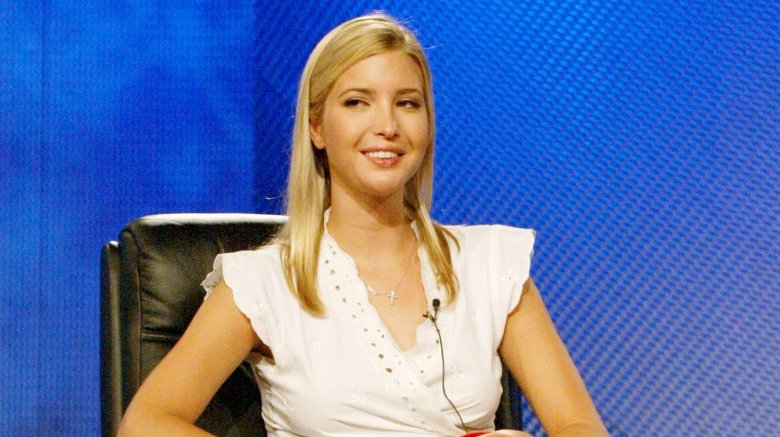 Despite a successful modeling career, Ivanka was destined for a different path. She told Marie Claire that modeling was never her “endgame.” She began her college career at Georgetown University where she studied for two years. 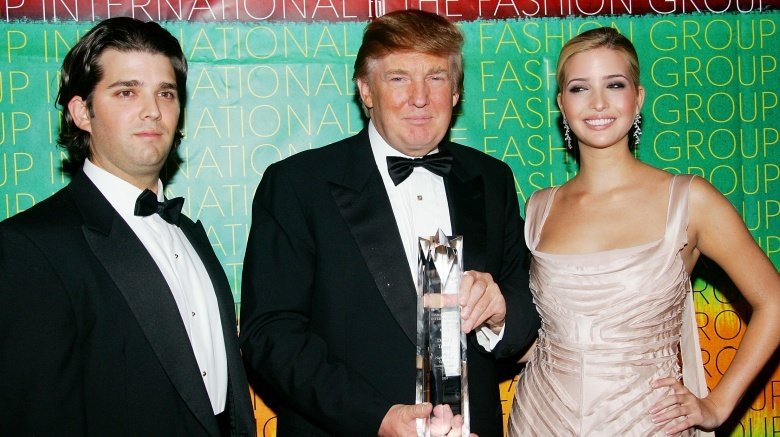 After graduation, Ivanka began working under Bruce Ratner at Forest City Enterprises as a project manager. This was her first professional introduction to working in real estate, despite her personal connection to the business through her father. It was important to her to prove that she had the chops for the business. She has said, that succeeding there “meant that I could move on to the Trump Organization knowing I have something to offer beyond my last name.”

She worked at Forest City Enterprises only briefly, joining her father’s business, The Trump Organization, in 2005. Just two years later in 2007 she founded founded Trump Hotels with her brothers. According to The Trump Organization, the company is now regarded as one of the fastest growing and leading hotel management companies in the industry. 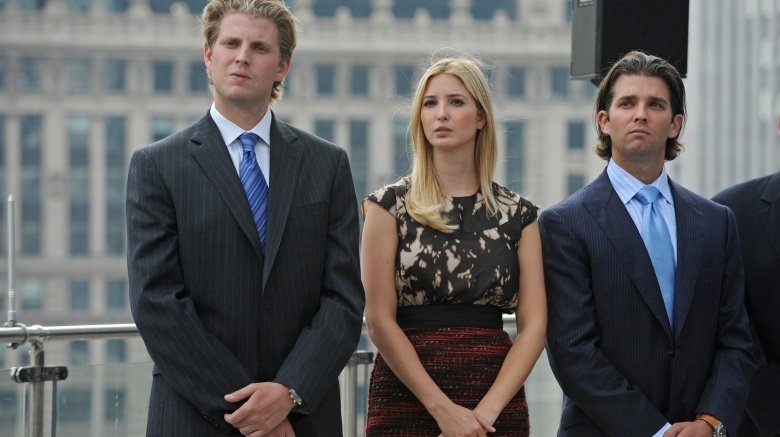 Alongside her brothers Donald Jr. and Eric, an older Ivanka ditches the sassy teenage ensembles for a more practical look at a press conference for her father’s Chicago Trump Tower. By now she’s proven her ability to look flawless on all occasions, whether for work or play.

As she told Forbes Woman Facebook followers in 2010, “my top three style tips for women at work are context, modesty and femininity,” all of which she nails here. 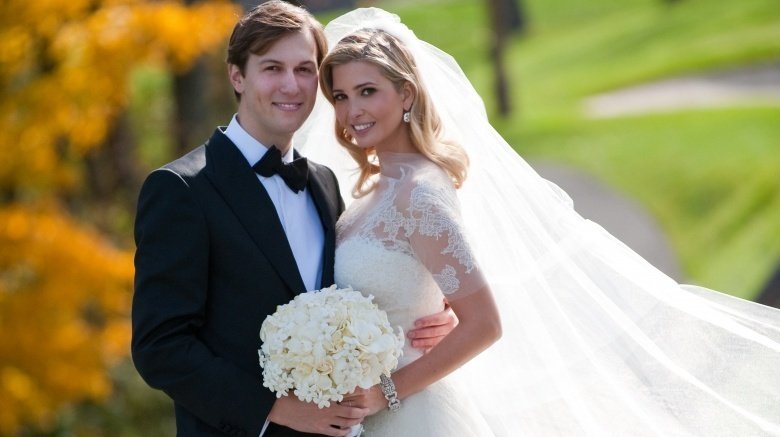 While Ivanka was raised Presbyterian, she made the decision to convert to Orthodox Judaism after studying for over a year. She then married her husband, businessman Jared Kushner, in a Jewish ceremony in 2009.

She wore a custom Vera Wang gown as well as earrings and other jewels from her own jewelry line. Ivanka described to Brides how she imagined herself as a bride, saying, “I would say I am a traditional/classic bride. This style is translated in my dress and jewelry choice,” and that she prioritizes “comfort” above all else. On designing the dress, Vera Wang told The New York Times, “she was actually very much about being covered and I seized on the chance to do a dress that wasn’t naked and very Hollywood.” 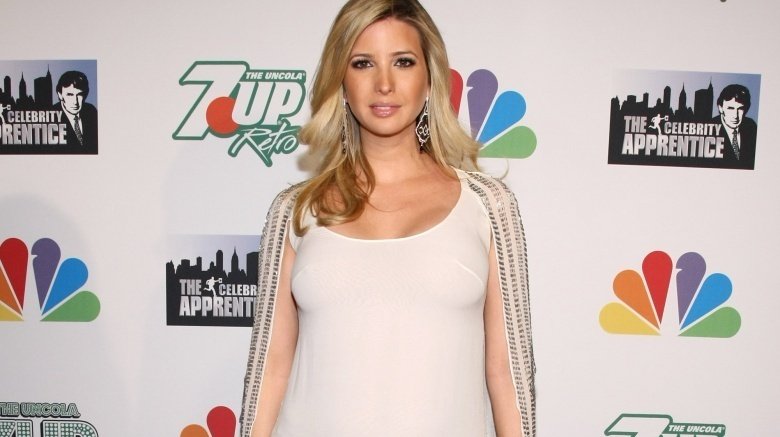 In 2011, Ivanka was pregnant with her first child with husband Jared Kushner. Despite her growing belly, Ivanka stayed true to her signature feminine style, while still working hard as a businesswoman. Forbes described her as the “world’s hardest working extremely pregnant heiress” when it was discovered she was working right up through her due date.

On maternity style in general, Ivanka told The Wall Street Journal, “you spend the better part of your youth experimenting and trying to find a style that fits your body type, and all that gets thrown out the window.” For those looking to duplicate her style, she adds, “maternity wear really makes you look much more pregnant than non-maternity wear,” so you should stick to pieces like skirts and dress (like this white one she wore to the Celebrity Apprentice season four finale at Trump SoHo) that “are quite easy to adapt.” 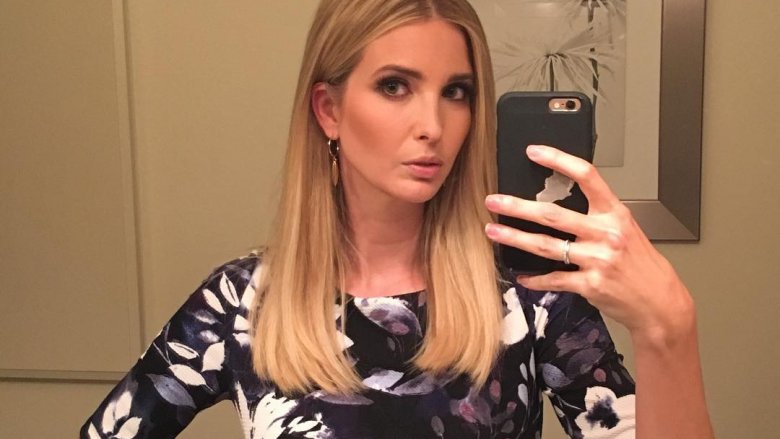 Although Ivanka had left the modeling world behind, she wasn’t quite ready to abandon her ties to fashion altogether. In 2007 she joined forces with a diamond vendor to create Ivanka Trump Fine Jewelry, a line of diamond and gold jewelry “for women buying for themselves”. Just a few years later she expanded the line to include shoes and handbags for working women. The line has since grown even further to include apparel, accessories, home accents, fragrance and sunglasses. 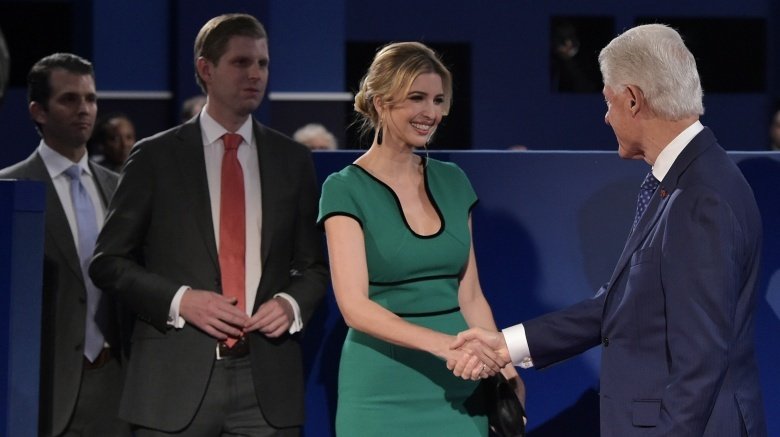 Ivanka has said that, like many millennials, she doesn’t consider herself categorically Republican or a Democrat, which might explain her relationship with the Clintons. In 2007, she donated $1,000 to the Hillary Clinton presidential campaign. While this may seem surprising given Clinton’s run against her father in the 2016 presidential election, it’s not once you know that Ivanka is friends with Clinton’s daughter, Chelsea.

In fact, Chelsea told Vogue that Ivanka sometimes reminds her of her father, Bill Clinton: “She’s always aware of everyone around her and ensuring that everyone is enjoying the moment,” she said. “It’s an awareness that in some ways reminds me of my dad, and his ability to increase the joy of the room.” 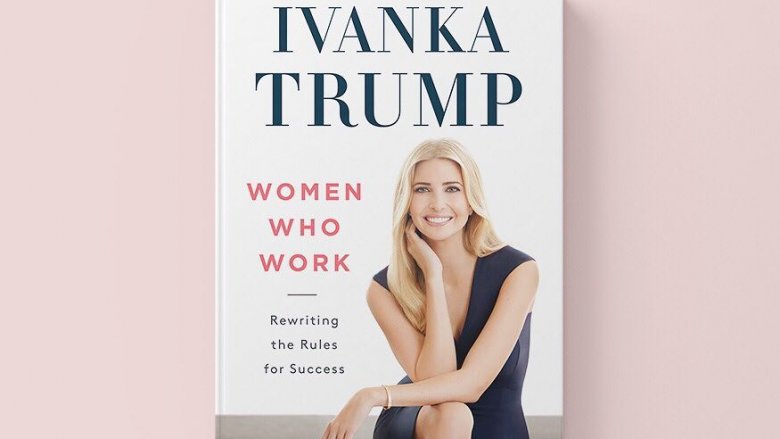 In 2009, Ivanka published her first book The Trump Card: Playing to Win in Work and Life in which she describes her childhood as the daughter of Donald and Ivana Trump, and her rise to become a vice president in the Trump Organization.

In it, she shares her recipes for success, tips on interviewing, and advice from many top female leaders like Arianna Huffington, Cathie Black and Tory Burch. The book became a New York Times bestseller, landing at number 13 within the Hardcover Advice & Misc category. She has since penned a second book, Women Who Work: Rewriting the Rules for Success, which is set to be published in March 2017. 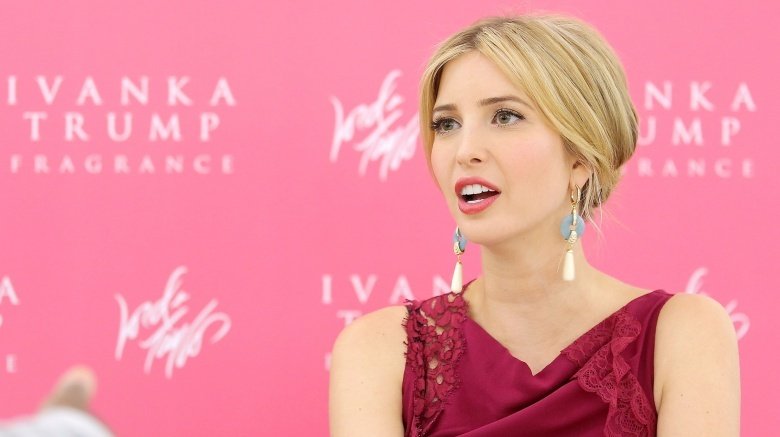 Continuing her trend of not being categorically Republican or Democrat, Ivanka endorsed Mitt Romney for president in 2012 after having endorsed Hillary Clinton during the previous election. “I think he’s got great business intelligence, which is extremely important.” She said of Romney during a segment on FOX News in March of that year. “He strikes me as a very solid person who can handle the enormous pressures of the office.”

Then, just a year later in 2013, Ivanka and her husband hosted a fundraiser for Democrat Cory Booker’s U.S. Senate campaign and bundled contributions of more than $40,000. Based on her history, it seems like Ivanka may be one of the people you can believe when she says she is neither completely Republican nor Democrat. 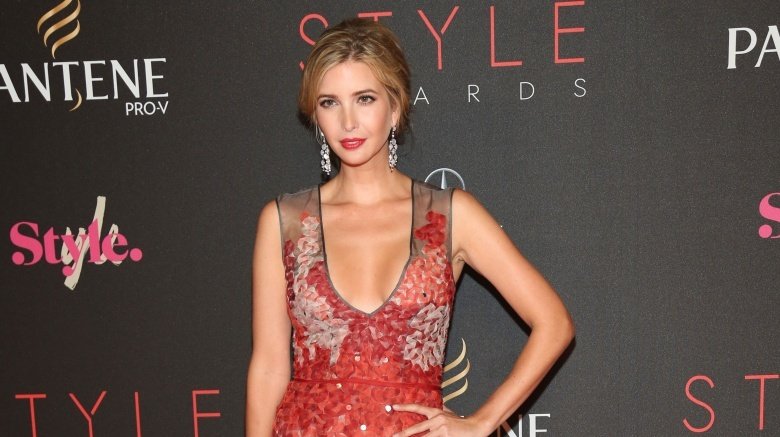 In 2007, the same year she launched the Ivanka Trump brand, Ivanka found herself on the Maxim Hot 100 list, showing the world that a business woman can be both wildly successful and sexy. Then, in 2012, she received the Joseph Wharton Young Leadership Award “for being a Wharton alumnus who, early in her career, has demonstrated great potential for leadership and lasting impact.” 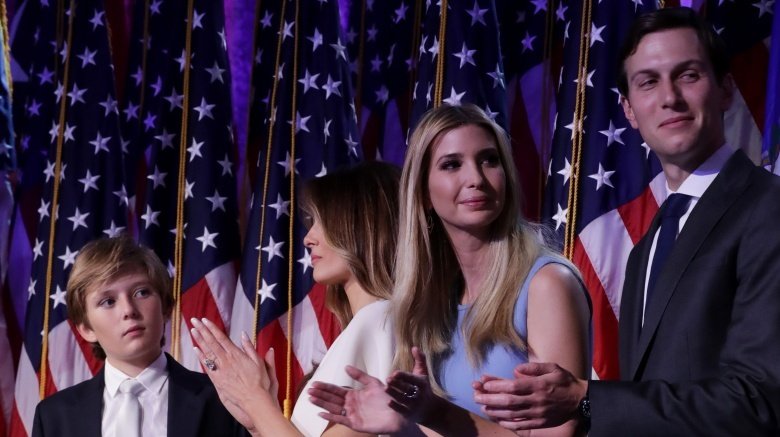 From 2013 to 2015, Ivanka primarily received recognition from within her industries, mostly staying out of the limelight. Then her father, Donald Trump, announced his run for president. She has stood up for her dad about his remarks on immigration and the way he treats and feels about women.

She also served as the face of the campaign’s outreach to women, saying at her father’s party nomination that he “understands the needs of a modern workforce” and is committed to changing “outdated labor laws” to support women and children. She also spoke out about her father’s 2005 comments about groping women saying that he recognized the language was crude and apologized. Some questioned Ivanka’s support of her dad given her history of calling herself a “huge advocate for women and women’s issues.” She responded by vowing to be an advocate for women and Israel in her role in her father’s presidency. 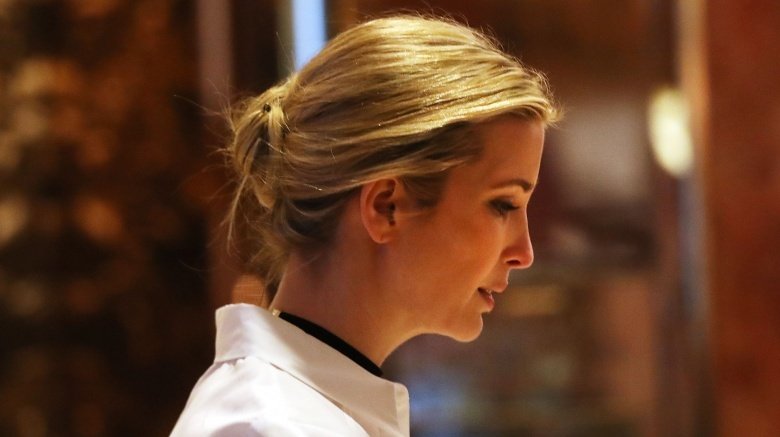 During and after the 2016 presidential election, women began calling for a boycott of all Trump-affiliated products, including Ivanka’s brand, and a full boycott of stores who continued to sell her brand. When asked about the boycott on Good Morning America, Ivanka said “People who are seeking to politicize it because they disagree with the politics of my father — there’s nothing I can do to change that.”

She went on to add “The beauty of America is people can do what they like, but I’d prefer to talk to the millions, tens of millions of American women who are inspired by the brand and the message that I’ve created.” While the Trump name may, to many, be in conflict with the “mercantile feminism” Ivanka’s brand represents, she doesn’t seem too worried about the future of her brand. 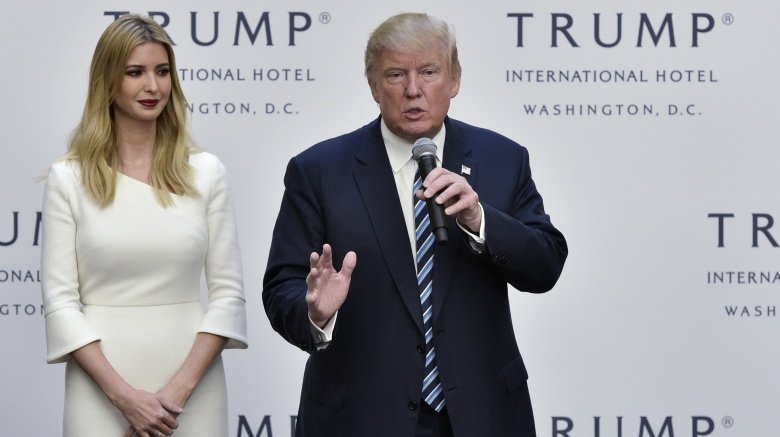 Over the years Ivanka has added model, fashion designer, businesswoman, wife, and mother to her resumé while continuing to make fashion a priority, even on her dad’s campaign trail. She introduced her father as Republican presidential candidate in a $138 dress from her own fashion line, which shouldn’t come as a surprise — after all, she told Teen Vogue, “in working on my collection, I really designed only things that I personally would love to wear.”

Her friendships, ambitions, and personal beliefs have evolved just as her style has, but Ivanka’s mark on the fashion and business industry is timeless. Who knows what Ivanka will do next, but now that she’s house hunting in Washington D.C., we’re guaranteed to hear more about her over the next four years. 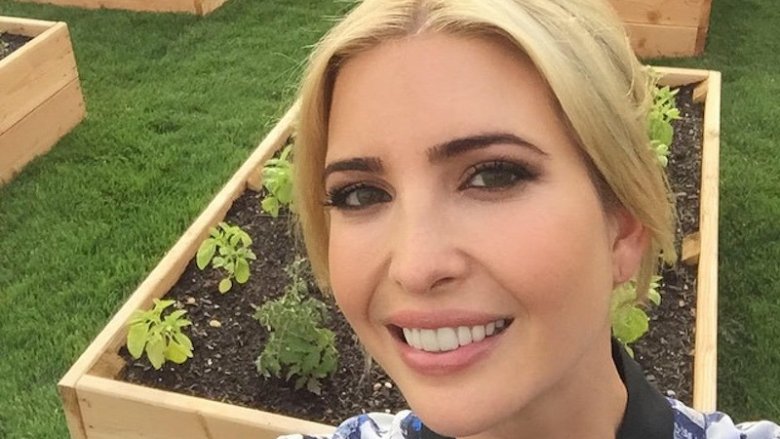 Ivanka Trump has always been a busy woman. That’s especially the case now that she’s working in the White House as an advisor to the POTUS on job creation and economic development. That can’t leave a ton of time for things like meal planning, cooking, and having meals with her husband and children, right?

Wrong. As it turns out, Trump has carved out enough time in her day to prioritize how she and her family are nourished. Additionally, she maintains a svelte figure, so she’s clearly making sure that she doesn’t overdo it on the food front.

So what does the wife, mother, entrepreneur, and White House insider like to nosh on for breakfast? Where does she dine out and what does she like to order? Does she resort to crash diets to keep her waist size small? Here’s the scoop on what Ivanka Trump really eats in a day.