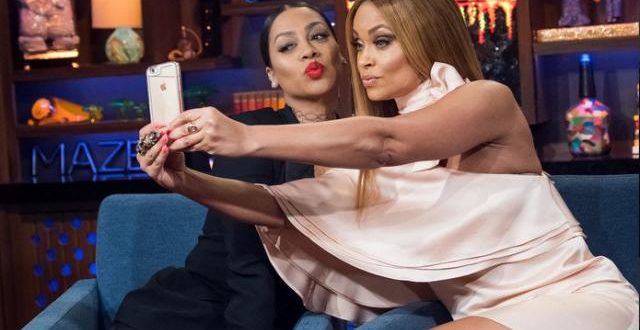 After last night’s season finale of Real Housewives of Potomac, Gizelle Bryant headed to the clubhouse to chat with Andy on Watch What Happens Live. Gizelle dished on Karen Huger‘s bizarre party, her treatment of Monique Samuels and so much more! Also in the clubhouse was former reality star La La Anthony – who has moved on to real acting gigs on the show Power.

Does Gizelle think they’re going to make a go of it? “I think so and they pounded it out at the end, that’s always a good sign.”

They show a photo from Karen Huger‘s “sexy photo shoot” and Gizelle laughs and says “it’s not sexy.”

On seeing Karen‘s new house, Gizelle says “We were totally unprepared for the drive out there to Great Falls and the fact that she didn’t downsize.” Andy commends her shade of “the drive out there.” She confirms that it’s about 25 minutes out of Potomac.

Andy plays clips from Karen‘s crazy awkward party and asks Gizelle if it was fun. “No, Andy! There were so many things wrong. We just were ready for it to be over.”

On what the streets have to say about her co-stars:

What is Monique‘s reputation in Potomac? Has she moved into the big house yet? “No, she’s still in Virginia.”

On Karen: is there any gossip about her renting in Great Falls? “Yes, that she had to leave for other reasons.” Andy says maybe we’ll find that out at the reunion.

On Charrisse: What do people say about her still being married to Eddie and is she dating? “Yes, she dates.”

A caller asks Gizelle for her opinion on Monique‘s costume. “It was typical Monique. A day out of school – no class. We didn’t understand it. Nobody understood it. Everybody was given the same invitation and everybody wore the same outfit, which was a Sari, and she came in as a Native American.”

Her biggest clothing and/or hair and makeup regret this season? “The clothing was my pink Bermuda shorts because nobody understood that Bermuda shorts were in Bermuda. And hair, some days good and some days bad.”

A caller asks what Gizelle thought about Karen‘s shady move to Great Falls? “I felt like she didn’t know what she was doing and Karen does a lot of things and then in the middle of it she’ll change her mind. I just felt it was a whim, ‘oh let’s move to Great Falls, it’s a big house.’ It doesn’t make any sense. Not to me or anyone else.”

Does she think installing a champagne room in one’s house is a good investment? “No.”

A viewer asks if Gizelle has any regrets about the way she treated Monique this season? “No, it was reciprocated, so absolutely not.”

Which of the Potomac ladies is the most fake? “Charrisse.”

See photos from their appearance in the gallery below. How fabulous did La La look?
Read more at http://www.realitytea.com/2017/07/03/gizelle-bryant-names-charrisse-fakest-cast-member-doesnt-regret-treated-monique-samuels/#XIzlLZB5rLeSWqem.99