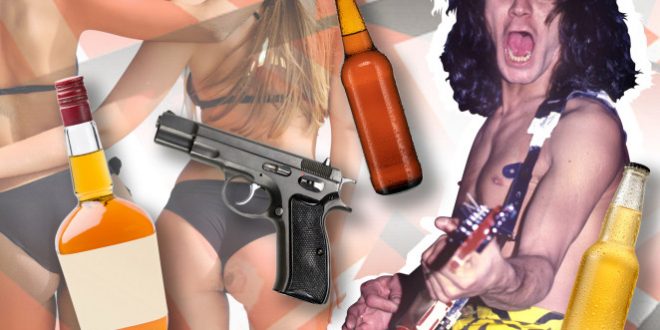 While performing onstage with his namesake band, Eddie Van Halen was famous for flying through the air, legs splayed, slashing out stinging riffs on his customized Stratocaster.

If fans wondered where the energy came from, they only needed to look on top of his amplifier cabinet, where, according to a story in the Daily Mail, he routinely laid out lines of cocaine. Snorts of powder kept him supercharged for the group’s high-energy performances. Just to make sure he had what he needed, Eddie reportedly aligned himself with a globetrotting drug dealer who’d fly anywhere in the world with a supply of top-notch Peruvian blow.

The beloved rock legend died Oct. 6 at 65 after a long battle with cancer.

To those who loved the band, Eddie’s onstage playing was legendary. But to those who worked with him and knew him best, it’s what happened offstage that remains truly unforgettable. Just ask Fred Durst. In 2001, as chronicled in the book “Eruption in the Canyon: 212 Days and Nights with the Genius of Eddie Van Halen,” Eddie engaged in an aborted jam session with the Limp Bizkit frontman. For some reason, Eddie happened to leave his equipment behind. When Durst was slow to return the gear, Eddie took matters into his own hands.

According to the book, Eddie hopped into an assault vehicle he somehow owned and drove to Durst’s home. Shirtless, gun in hand, hair up in a samurai bun, he knocked on the door. According to author Andrew Bennett, Eddie told him, “That a - - hole answered the door. I put my gun to that stupid f - - king red hat of his, and I said, ‘Where’s my s - - t, motherf - - ker?’ That f - - king guy just turned to one of his employees and starts yelling at him to grab my s - - t.”

The book maintained that Eddie kept a pistol pressed to Durst’s head as the musical equipment was loaded into Eddie’s military-surplus vehicle.

But Eddie — whose usually trashed home studio was named 5150, referring to the section of California’s Welfare and Institutions Code which allows a police officer to involuntarily confine a person deemed to have a mental disorder that makes them a danger  — was unpredictable.

There was the concert appearance when he was about to get onstage with Sharpie scribblings inexplicably all over his face and chest. Fortunately, an aide helped him wash off the ink before he hit the footlights and embarrassed himself. And there was the night he showed up at bandmate Sammy Hagar’s oceanfront home at 2:30 in the morning, blitzed out of his mind, bottle of Jack Daniels in hand, demanding that they write a song together. Hagar — who replaced David Lee Roth as Van Halen’s vocalist in 1985, after Eddie tracked him down through an auto mechanic they both used — recounted that tale, as well as his betrothed’s chagrin over the unexpected visit, in his memoir “Red: My Uncensored Life in Rock.” He added that Eddie’s then-wife Valerie Bertinelli — the two married in 1981, soon after she first spotted him on the back of a Van Halen album cover — had tossed Eddie from their home for the night.

But plenty of weird things happened with Eddie. Like the time a woman filed a paternity suit against him. Eddie shrugged it off, insisting that their sexual relations all took place in his car on the Pacific Coast Highway and were strictly oral. “You know how I like a pretty face in my crotch,” he allegedly told Van Halen road manager Noel Monk, author of “Runnin’ With the Devil: A Backstage Pass to the Wild Times, Loud Rock, and the Down and Dirty Truth Behind the Making of Van Halen.” Even Eddie could not impregnate a woman via her mouth. The suit was tossed.

Hopefully, however, Eddie was driving somewhere close to the speed limit when the deeds went down. He and Hagar were both car fanatics and enjoyed racing their pricy Italian autos. Recalling what transpired after recording sessions, Hagar wrote about the bandmates blazing down LA roadways at speeds of 150 miles per hour.

Better, perhaps, with cars than with people, Eddie was not the easiest person in relationships.  His bouts with former Van Halen frontman David Lee Roth were legendary. A vexed Eddie once whipped a glass bowl of guacamole at Roth’s head. And he didn’t exactly give Bertinelli the kid-glove treatment either. When she joined him on one of the band’s tours, Eddie reportedly had her sleep in an adjoining bedroom, so that he could stay up all night with his booze, cocaine and guitar.

According to Monk’s book, after the solo music-making, he’d settle in with the road manager, lay his head upon Monk’s shoulder, tell him how much he loved him and doze off like a baby with a bottle of vodka pressed against his lips.

If Eddie was selfish with his time, the same could not be said for his drugs — “Ed likes me skinny,” Bertinelli reportedly told Monk’s fiancée to account for her dips into Eddie’s cocaine supply — and his body. In his book, Monk wrote that Eddie had been banging a smorgasbord of groupies every night prior to Bertinelli’s arrival on the tour.

But, of course, girls were easy to come by and often got treated disrespectfully. In his book, Monk recounted the night that Eddie and his bandmates had a willing fan lay naked in bed so that they could cover her in condiments — and they did.

But the wild lifestyle took its toll on the great guitarist. He wound up needing a hip replacement in 1999 and became alarmingly skinny following his diagnosis of throat cancer in 2000.

Hagar wrote about the six-string maestro being addicted to cigarettes and alcohol while battling the disease that landed in his throat and killed him. According to Hagar, in the early 2000s, many of Eddie’s teeth were missing and the ones that remained had turned black. Hagar attributes that to Eddie’s habit of drinking rotgut wine directly from the bottle.

When Hagar suggested that Van Halen use a glass, the guitarist hoisted his bottle and cheekily replied, “It’s in a glass.”

Portions of his tongue had been cut off, leaving Eddie speaking with a lisp. As Hagar wrote in his book, “He told me he cured himself [of cancer] by having pieces of his tongue liquefied and injected into his body. He also told me that when he had his hip replacement, he stayed awake through the operation and helped the doctor drill the hole. What a fruitcake.”

It’s tough to dispute the weirdness, wildness and extremeness of Eddie Van Halen — qualities that came through in his guitar virtuosity and in his lifestyle — but, today, it’s better to remember him by the memorial that Hagar posted to Twitter. Above a photo of the two, happily buddied up together on a jet, the vocalist wrote, “Heartbroken and speechless. My love to the family.” 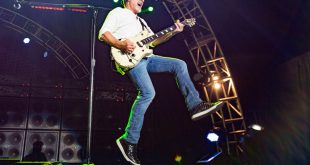