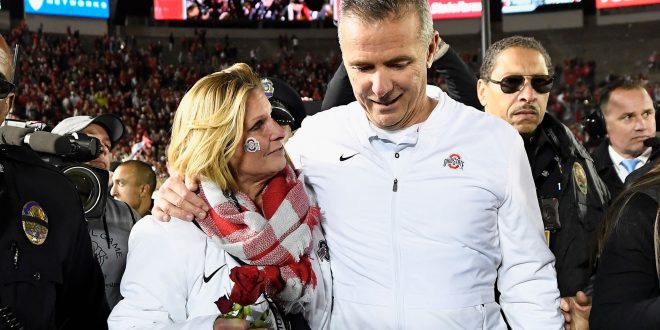 The mother of a woman seen dancing on Urban Meyer last weekend — video of which sparked a media firestorm for the Jaguars coach — is very concerned about her daughter.

“[She] can’t even go anywhere. It’s ruining her life is what it’s doing,” her mother told USA Today Sports in an interview published Thursday. “I’m worried for her emotional status right now.”

In a since-viral video, Meyer was seen at his Urban Chophouse restaurant in Columbus, Ohio, on Friday, where the woman was dancing on his lap. Meyer’s wife, Shelley, meanwhile, shared on Twitter that she was at home babysitting the couple’s grandkids.

The first-year Jaguars head coach addressed the situation and apologized for “being a distraction” in a Monday press conference. He said he apologized to the team, owner Shad Khan, general manager Trent Baalke, and his family, noting that his loved ones are “upset.”

The outlet did not identify the woman, who is described as a “24-year-old” due to backlash the family has received since the footage went public over the weekend.

Brian Duncan, an attorney representing the company, said it is conducting an internal investigation into the incident.

The company is not in a position “to make any determination as to her (employment) status,” Duncan told USA Today, noting that the woman is still working for New Horizon Media Group amid the investigation.

Alex Cruz, the owner of New Horizon Media Group, referred to Duncan when USA Today asked for a comment.

“I just pray that Alex doesn’t fire my daughter because she needs this job,” the mother said, adding that her daughter “just bought a house.”

Duncan explained that the company is “going to undertake our internal investigation to determine what, if any, impact this has on the company and we’ll proceed accordingly.”

The lawyer noted that New Horizon Media Group has done work for Urban Chophouse, and there is no knowledge that the woman had a previous relationship with Meyer.

Meyer has not been disciplined by the team or the NFL, though Jaguars owner Khan said the former Ohio State coach has made a “personal commitment” to earn back the team’s “trust and respect.”

A day prior, Shelley addressed the situation on her since-deleted Twitter account, writing, “This will be my last post on Twitter. Frankly, I don’t need the hate, vitriol, slander, trash that will @ me. We all make mistakes. We are all sinners. If you think you aren’t? Then cast the first stone.”