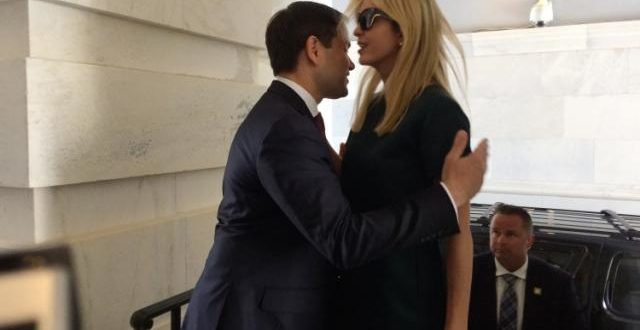 Florida Sen. Marco Rubio probably started out his day Tuesday thinking about paid family leave, child care tax credits and other deep issues. But when Twitter went wild over an awkward photo of him leaning in for a hug with Ivanka Trump when she arrived for a Capitol Hill meeting, Rubio was smart enough to play along.

The photo, taken by an Associated Press congressional reporter with an iPhone, appears to show Trump declining to hug Rubio back as the two greet one another just outside the Capitol.

Twitter users dissected the seemingly awkward moment endlessly. They compared Rubio to Ralph Wiggum from “The Simpsons” when he doesn’t get a Valentine’s Day card, and to Dr. Evil from “Austin Powers” asking his son for a hug.

Rubio responded in a series of joking tweets late Tuesday, announcing that he would be investigating what he termed the “alleged failed hug.”

“We believe we have our own unclassified photographic evidence that will shed greater details on this incident,” the Republican senator said, adding, “We are also attempting to acquire multi-angle video which we believe will provide greater insight into this important matter.”

Several minutes later that was followed up by another photo showing Trump with her hand on Rubio’s shoulder, and the caption “BREAKING NEWS: Additional photo from moments right after today’s alleged failed hug provide new details to this developing story.”

Trump herself joined in Tuesday evening, tweeting: “Anonymous sources say @marcorubio planned the alleged failed hug. I have no comment (but I would have hugged him anyway!)”

She then added: “Fake news! Marco is an excellent hugger.”

The Associated Press stands by its photo.

An occasional look at what Capitol Hill is talking about