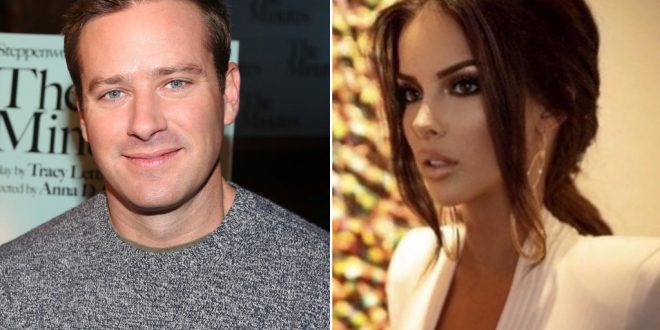 Armie Hammer’s latest ex-gal pal says their romance was like dating a wannabe Hannibal Lecter — as the Hollywood star’s idea of pillow talk was fantasizing about which of her body parts he’d like to roast and devour.

“He said to me he wants to break my rib and barbecue and eat it,” app founder Courtney Vucekovich exclusively told Page Six.

“‘F–k that was weird,’ but you never think about it again,” she said of overlooking the odd behavior at the time. “He says, ‘I want to take a bite out of you.’ If I had a little cut on my hand, he’d like suck it or lick it. That’s about as weird as we got.”

In one, shared by anonymous Instagram account House of Effie, Hammer allegedly asked a partner if he could “cut off one of your toes and keep it with me in my pocket so I always had a piece of you in my possession.”

In another, he allegedly described himself as “100 per cent a cannibal.”

While Vucekovich, who dated Hammer from June to October, couldn’t confirm whether those specific screenshots were legitimate, she said they were no surprise.

“He likes the idea of skin in his teeth,” she claims.

Vucekovich, who spoke following a divorce filing by Hammer’s estranged wife Elizabeth Chambers, tells Page Six that her relationship with the “Call Me by Your Name” actor was not only weird and gross but also emotionally abusive.

RELATED:  Armie Hammer will ‘step away’ from Jennifer Lopez movie amid DMs scandal

“He enters your life in such a big way. He’s such a captivating person. He has such a presence and he’s aware of that and he uses it in such a way that most women would think, ‘Oh my gosh, this is amazing,’ but especially young women, that’s kind of the scary part — how good he is at active manipulation and making you feel like he’s never felt this way about anybody,” Vucekovich, 30, told us.

With the “Rebecca” actor’s overpowering presence, charm and charisma, Vucekovich found herself submitting to Hammer physically and emotionally, only to realize she was being manipulated and gaslit.

“He quickly grooms you in the relationship,” she explained. “He kind of captivates you and while being charming, he’s grooming you for these things that are darker and heavier and consuming. When I say consuming, I mean mentally, physically, emotionally, financially, just everything.”

Vucekovich claims Hammer is a “chameleon” who transforms into “exactly who you need him to be.”

Eventually, Hammer’s behavior turned “obsessive,” Vucekovich claims. At one point, she and Hammer spent three weeks together, 24/7, and when they weren’t together, she says, he would text her 100 times per day.

“I wasn’t safe,” she realized. “He kind of makes it like, ‘I’m going to teach you things.’ I’m smarter than that, but where was I during that? I knew the whole time. I had this gut feeling the whole time that this was not right. He’s not well.”

Vucekovich claims “The Social Network” actor would drink and do drugs “all the time,” which left her feeling compromised and scared.

“He did some things with me that I wasn’t comfortable with,” she said. “For God knows what reason, he convinced me that these things were OK and he put me in some dangerous situations where I was not OK, where he was heavily drinking, and I wasn’t drinking that way and it scared me. I didn’t feel comfortable.”

She added, “You end up doing things that are very out-of-character for you, including sex acts.”

Vucekovich declined to name the sexual acts because she didn’t want them to overshadow the toll Hammer’s emotional abuse took on her.

The Dallas-based business owner describes Hammer as one of the “most broken” people she’s ever met.

“He makes you feel bad for him, and that’s really scary and keeps you [close to him],” she explained.

At one point, Vucekovich found herself paying for everything, including gas for his truck, because he’s allegedly broke.

“He needs you,” she said. “He actually needs you.”

“It’s a full-time job when you’re with him the way that I was,” she explained. “I was trying to catch my breath the entire time I was with him. You’re drowning in this dark hole trying to stay afloat. There will be random moments of good that convince you to stay.”

“He blows up [women’s] lives like that and walks away,” she said.

Following their breakup, Vucekovich found herself having panic attacks thinking about what she endured in their volatile relationship. Her chest hurt and she struggled to breathe, so she checked herself into a 30-day partial hospitalization program for PTSD and trauma.

RELATED:  Armie Hammer will ‘step away’ from Jennifer Lopez movie amid DMs scandal

“I didn’t want to carry that into my future,” she told Page Six. “As a strong mental health advocate, I knew that this relationship was something I needed to process with help from people who specialize in trauma and PTSD. That is my experience.”

Vucekovich says therapy was the key to her recovery.

“Therapy is really helpful after healing from any kind of abuse,” she said. “You don’t want to take that trauma with you.”

A rep for Hammer didn’t respond to numerous requests for comment, though he called the viral DM allegations “bulls–t” in response to news that he was stepping away from his romcom with Jennifer Lopez, “Shotgun Wedding.”

“I’m not responding to these bulls–t claims but in light of the vicious and spurious online attacks against me, I cannot in good conscience now leave my children for four months to shoot a film in the Dominican Republic,” Hammer said in a statement to Page Six, adding, “Lionsgate is supporting me in this and I’m grateful to them for that.”

Hammer is holed up in the Cayman Islands, where his two kids, Harper, 6, and Ford, 3, have been living with Chambers since the start of the pandemic. He’s been fighting for joint custody of the children in their divorce proceedings.

In light of the troubling alleged messages, Hammer’s past quotes about his sex life have resurfaced.

“I liked the grabbing of the neck and the hair and all that. But then you get married and your sexual appetites change,” he told Playboy in 2013. “And I mean that for the better — it’s not like I’m suffering in any way. But you can’t really pull your wife’s hair.

“It gets to a point where you say, ‘I respect you too much to do these things that I kind of want to do.’”

He later claimed in a separate interview that he was drunk at the time of the interview.