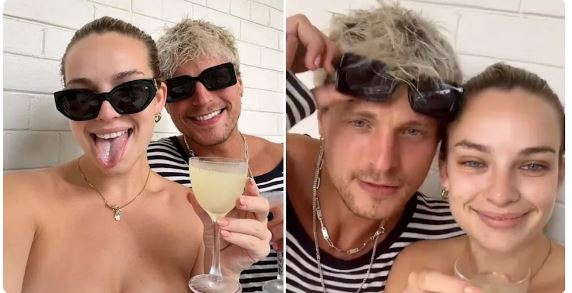 Abbie Chatfield has made things Instagram-official with The Bachelorette’s Konrad Bien-Stephens in a series of adorable photos.

It comes after Bachie fans were sent into a spin earlier this month when the duo were spotted getting hot and heavy together in a Byron Bay bar.

And now Abbie has ‘hard launched’ her new relationship on Instagram, with a carousel of snaps showing the pair looking very happy together.

One video shows the couple lying on the couch with Abbie waving her foot jokingly in Konrad’s face, while another shows Konrad helping Abbie put eye drops in her eye.

Other snaps show the couple smiling for the camera and another sees Abbie tenderly kissing Konrad’s forehead.

Fans and fellow Australian celebs were delighted to see the romance being made official online, with former MAFS star Martha Kalifatidis writing: “Oh cuteeeeee babes we love to see it.” 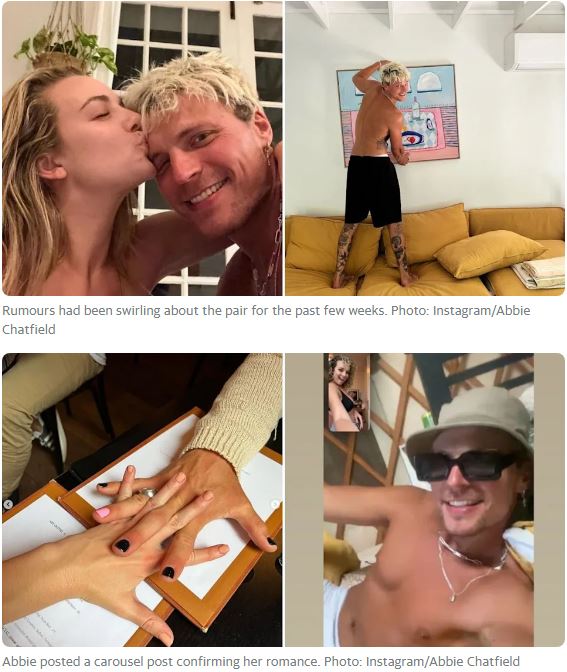 Fans of the pair were over the moon, with one person saying: “The fact that Machine Gun Konrad and Astrology Abbie are dating fills my heart with joy.”

Another person wrote: “I didn’t know this would make me so happy.”

Earlier this month, Konrad confirmed the relationship in an interview with Yahoo Lifestyle, saying he and Abbie had started seeing each other and he was eager to see how things go.

“We filmed The Bachelorette ages ago, production ended back in August,” he explained. “Brooke and I weren’t meant to be and having said that, Abbie is an amazing girl.

“I’m really, really excited to get to know her and see what the future holds between Abbie and I.”

Rumours started swirling about the pair at the beginning of November, while Konrad was still a contender on Brooke Blurton’s season of The Bachelorette.

In an episode of Abbie’s podcast, It’s a Lot, the 26-year-old declared that she and one of her best friends were “fighting over Konrad” and she hinted at requesting an in-person interview with him if he is ever eliminated from the show.

“It’s so cliché, but he’s got little things on his nails, like little smiles. I know it’s so soft boy, it’s cute. He’s cute. I like him,” she remarked.

Abbie also said that she wants Konrad to “take care” of her and be her “love seat”, which is a reference to the drama earlier this season where he and Brooke built a chair together on the red carpet.

A few days after her PDA with Konrad, the I’m A Celebrity champion took to Instagram to reveal that she had been on a date with a mystery man, but it’s not known who she was talking about.

She also asked her followers if she should pursue the new relationship if they have the same star sign.

“How do we feel about two Geminis being more than friends? Is it bad? Is it good? Not that I really care, or that I’m asking… But yeah, let me know,” she said, before posting a poll on her story.

In a follow-up post, she said that she and her date had “just kissed in the car listening to Savage Garden” while he downloaded an astrology app, The Pattern, for her.