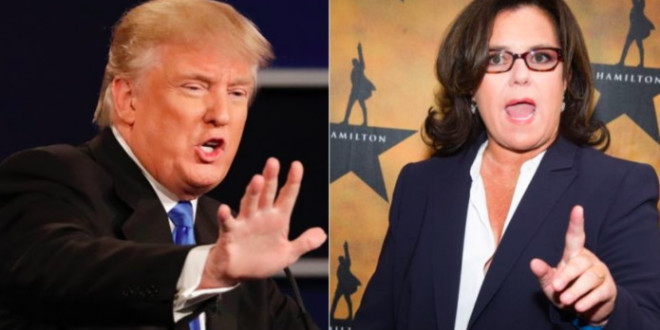 One of the many astonishing moments of the first 2016 presidential debates was Donald Trump reigniting his feud with Rosie O’Donnell out of nowhere. Why is there so much hatred between these two that it has bled into his candidacy?

It all goes back to 2006, during O’Donnell’s first stint on The View. Trump had just allowed Miss America Tara Conner to keep her crown after her drug use and underage drinking were revealed. O’Donnell told the panel she wholeheartedly disagreed with Trump’s decision and recited a list of reasons why she doesn’t like him, briefly mentioning the fact that he filed for bankruptcy. This video of those decade-old comments was tweeted the morning after the debate.

Trump hit back with a scathing rebuke in People magazine, hitting far below the belt.

“Rosie will rue the words she said,” Trump told the mag in December 2006. “I’ll most likely sue her for making those false statements — and it’ll be fun. Rosie’s a loser. A real loser. I look forward to taking lots of money from my nice fat little Rosie.”

“I was never a friend. She came to my wedding. She ate like a pig… look, I know her well. She’s not a very bright person.”

Fast-forward to 2011. Trump had discovered Twitter. When O’Donnell announced her engagement to Michelle Rounds, he took the opportunity to insult the couple rather than extend his congratulations.

O’Donnell immediately fired back, including a link to a Time magazine article detailing his 10 biggest business failures.

Trump then tweeted a video in which he called her show on OWN “a complete and total disaster.”

“It’s really amazing. When I don’t like somebody their shows do really badly,” he said.

During the last election cycle in 2012, Trump managed to sneak another O’Donnell insult into a rant against a totally different celebrity.

But later that year, there seemed to be a truce. After O’Donnell suffered a heart attack, Trump actually seemed genuinely concerned for her well-being.

No one was more shocked than O’Donnell — and even she suspected that it might be a trap.

The feud moved to the back burner while O’Donnell recovered and underwent weight-loss surgery, but when O’Donnell began speaking out about her health, Trump couldn’t let the moment pass without comment.

Later that year, ABC announced O’Donnell would reclaim her place on The View. Trump definitely had an opinion about that.

RELATED:  Trump says Gov. Cuomo must end NYC ‘crime wave’ — or he will step in

O’Donnell later discussed Trump’s comments about her weight with People. “Probably the Trump stuff was the most bullying I ever experienced in my life, including as a child,” she said. “It was national, and it was sanctioned societally. Whether I deserved it is up to your own interpretation.”

Trump’s response was familiar to anyone who ever sparred with mean children: “You started it!”

Following O’Donnell’s announcement that she was leaving The View and experiencing family troubles — which turned out to be the end of her marriage to Rounds — Trump rubbed salt in her wounds by once again calling her a “loser.”

“Well, it’s very sad what’s happened to The View and I predicted that with Rosie O’Donnell it would fail,” he told E! News. “I guess the prediction is correct, but, I mean she’s a total train wreck, so let’s see what happens and I hope it works out well…. I like the show a lot, but let’s face it, Rosie is a loser.”

“Only Rosie O’Donnell,” he quipped.

Trump was pretty busy through much of 2016 securing the Republican nomination, an event that left O’Donnell in disbelief.

In May, O’Donnell dedicated a fiery stand-up set to her nemesis, telling him, “Eat me.”

And finally, at the first 2016 presidential debate, Trump brought O’Donnell into the mix again. When called out by Democratic nominee Hillary Clinton for his history of misogyny, Trump strangely tried to defend himself by saying O’Donnell deserved his wrath.

“Rosie O’Donnell, I said very tough things to her, and I think everybody would agree that she deserves it and nobody feels sorry for her,” he said.

O’Donnell did not let that slide.

O’Donnell rang in the new year by firing off a tweet claiming Trump is mentally unstable.

Her tweet included a link to an article from CNN, which asserts Harry Hurt III, who wrote a book critical of Donald Trump in 1993, was kicked off a Trump-owned Florida golf course Friday when Hurt attempted to greet the president-elect, who was also playing a round.

Hurt told CNN of Trump’s time in office, “Donald will continue to exhibit the erratic behavior he has exhibited his entire life.”

As for O’Donnell, she concluded her tweet by rallying Americans to stop him in the three weeks before his inauguration as president, which is scheduled to take place on January 20, 2017.

With roots so deep, this is one feud — or non-feud, as O’Donnell says — that may never be resolved.