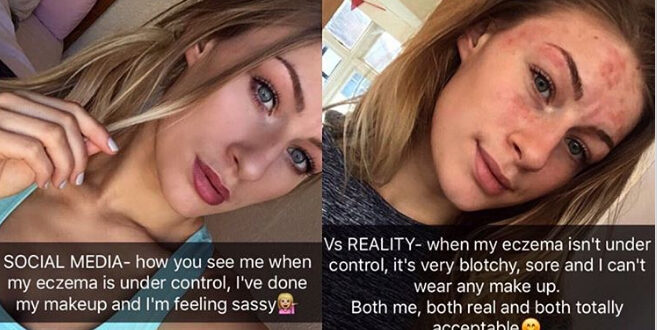 “Both me, both real, both totally acceptable.”

Carys Gray (@busybeefitness) is a 20-year-old student from Wales with more than 131,000 Instagram followers. She often posts selfies of herself working out or modeling cute fitness clothing:

But on Wednesday, Gray posted a photo revealing a very different side of her.

“Slightly different #REALITYCHECK today,” she wrote in the caption. “Social media/Instagram will show the good days, the good parts of people and their lives — and that’s OK! That’s what social media is for! But here’s a reminder that next time you see something on social media that you think is ‘goals’ that it’s not the full story, it’s not how that person will look or be alllllll the time …. I’m still struggling to accept myself on the right .. .”

In the photo on the left, Gray is wearing makeup and looking flawless. On the right, she’s makeup-free, with red patches covering almost half of her face.

Gray has eczema, a chronic condition marked by patches of dry, itchy skin. Although she’s been dealing with it her entire life, she was suffering from one of her worst facial flare-ups yet when she decided to take the photo pictured above. “I was close to tears, and I usually try and post about things I struggle with, so I decided to post about it,” she says.

While her flare-ups can be unpredictable — “the hardest part is finding out what is causing the flare up at that time and then eliminating it from my lifestyle,” she says — Gray noticed this one when she came out of the shower one morning after sleeping with traces of mascara on her lashes due to haphazard makeup removal.

Regardless of whether her skin is acting out, which can make her feel self-conscious, the condition affects Gray’s daily life. She has to moisturize her entire body at least twice a day, use special products prescribed by her doctor, splurge on special makeup designed for sensitive skin, and be extra careful to avoid wearing clothes that can potentially irritate her. She’s on a long-term steroid treatment to keep things under control and relies on a strong topical steroid treatment to sooth flare-ups, even though it can ultimately thin and damage her skin.

Although Gary knows that opening up about her eczema won’t cure her condition, she was moved by the number of people who responded to her post as it’s proof she’s not the only one who struggles with this sort of thing. Her best advice to others going through it: “Try to embrace your insecurities. Don’t allow your skin problem to define who you are or what you are doing with your life,” she says. It’s advice everyone should take to heart, before using filters to hide their imperfections from the world.

No, thanks.
RELATED:  Makeup-free selfies for summer inspiration 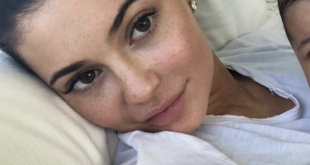