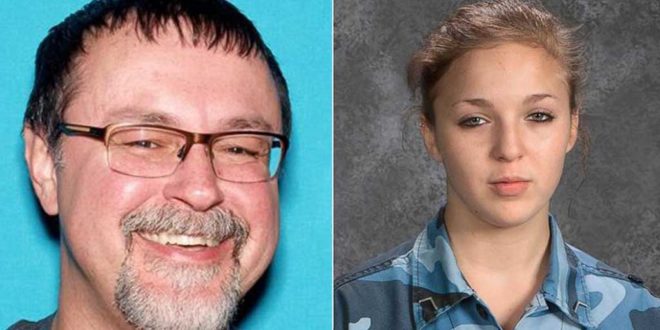 Elizabeth Thomas was only 15 when she went missing from her hometown of Columbia, Tennessee earlier this year. 39 days later she was found in a remote cabin in northern California, after an extensive search. The troubled teen had been abducted from a restaurant by her 50-year-old former teacher, Tad Cummins, and taken 2500 miles across the country.

Now Thomas, who is currently in a trauma treatment facility, is claiming she doesn’t want to return to her family in Columbia, Tennessee, because she is ‘in love’ with Cummins – a married grandfather.

Thomas was the subject of a nationwide amber alert when she disappeared on March 13. It is alleged that Cummins spent months grooming her while teaching at the school she attended – he was suspended from his teaching job when another student witnessed him kissing Thomas in a classroom.

DailyMail.com has reported that Thomas was admitted to a special treatment centre for trauma victims, rather than return to the home with her father. Her situation is complicated by a turbulent family life – her mother is facing trial for the alleged abuse of Thomas and several of her nine siblings.

Kimberly Thomas, 48, is currently facing allegations that she beat her children, locked them in a basement and threw them down stairs. Anthony Thomas, 49, currently has custody of the children.

Thomas has said she doesn’t want to go back into the care of her father and would rather live with Paige Griffith, the mother of one of her close friends, and continue to date her abductor. According to DailyMail.com, the teen is claiming she believes she is a ‘fully grown woman’ and should have the right to ‘love who she wants’.

On March 13 Cummins left his wife a note saying he was ‘traveling to Virginia Beach or the D.C. area to clear his mind’, then picked Thomas up from a local restaurant. The couple drove west, before hiding out for ten days in a remote commune in Cecilville, California, posing as a married couple.

Cummins is currently awaiting extradition to Lawrence County, Tennessee, where he faces 12 years imprisonment for aggravated kidnapping and sexual contact with a minor if convicted.