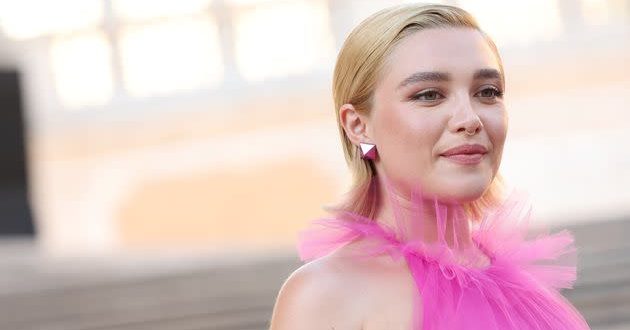 Florence Pugh has a sharp sense of humor to match her sense of style.

The Midsommar star, 26, took to Instagram on Saturday to share a series of stunning red carpet photos. In the photos, the Marvel performer wore a see-through bright pink tulle Valentino gown with a high, halter-style tied neck that revealed her shoulders and bare back as the fabric flowed behind her. She paired the dramatic outfit with matching thick pink platform shoes, a nose ring and her blonde hair slicked back behind her ears. The actress made a joke about showing her nipples on the red carpet in Rome for Valentino’s show.

“Technically they’re covered?” Pugh captioned the photos, referring to the see-through nature of the dress, which she said had her “feeling magical.” She went on to tag Valentino’s creative director Pierpaolo Piccioli, whom she referred to as an “absolute genius.”

“Stunning. Stunning. Stunning evening,” wrote Pugh, who tagged her makeup and hair team in the photos as well. “Thank you again, my beautiful team, for making my pink princess dreams come true.”

Pugh is rarely one to back away from revealing her true self. Back in 2018, the British beauty explained that she felt Americans tend to be a bit skittish, particularly when it comes to the topic of nudity. In fact, she said the amount of nudity in the TV miniseries adaptation of John le Carré spy thriller The Little Drummer Girl — in which she played an actress who was undercover as a spy — had to be monitored in order to avoid alienating American audiences.

“America is quite scared of bums. And nipples. We had to make sure there were no bums and nipples out. I don’t know why. Such strange people,” said Pugh, speaking to the Radio Times.

Growing up, Pugh said she was taught to be comfortable with the human body. A lot of her education on the topic was instilled in her by her parents, who showed the family European films that contained a higher level of nudity.

“My parents were very cool and made sure we watched lots of European films when we grew up, so nudity has never been a problem for me, as long as it’s done beautifully,” she explained.

Despite her strong level of comfort with nudity, Pugh said at the time that she didn’t think she would ever become notorious for taking off her clothes onscreen.