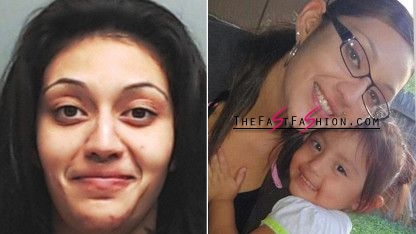 A mother has been charged with capital murder after she allegedly stabbed her 5-year-old daughter to death in their Texas home on Thursday, according to police.

The Hays County Sheriff’s office said they received a 911 call reporting an aggravated assault to the home and when they arrived they found 58-year-old Eustorgio Arellano-Uresti in the driveway with multiple stab wounds and a 10-inch knife in his back pocket, according to the report.

Arellano-Uresti told police that his daughter-in-law, 24-year-old Krystle Villanueva, stabbed him and was alone inside with her daughter.

They then found Villanueva getting out of the shower and 5-year-old Giovanna Hernandez dead inside of a bedroom, according to police.

“This is one of the worst cases I’ve ever seen,” Sheriff Gary Cutler said. “The suspect has had minor issues with law enforcement in the past, nothing major.”

Arellano-Uresti told officers that at around 11 a.m. he walked into the kitchen to make lunch when he saw Villanueva take a knife to a back bedroom. He then heard the child crying.

Authorities said they believe at this time Villanueva was stabbing her daughter. The mother then returned to the kitchen and began stabbing her father-in-law in the back and forehead as he tried to grab the knife, the affidavit said.

Villanueva allegedly abused drugs and had been diagnosed with bipolar disorder, schizophrenia and ADHD, according to court documents.

Villanueva has also been charged with aggravated assault, a second degree felony.

Arellano-Uresti is expected to recover.

Previous Five Ways to Make Your Eyes Look Bigger and Bigger!
Next If You Prefer Emily Ratajkowski’s Bikinis, You Obviously Haven’t Seen Her Baywatch Suit