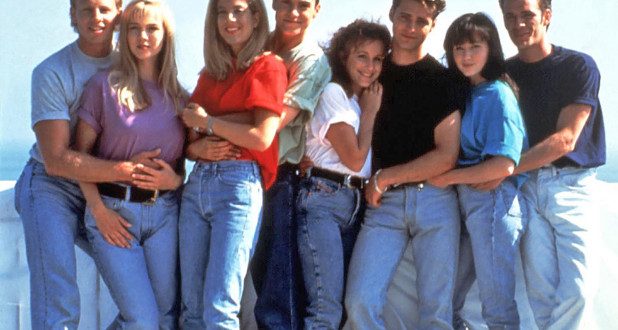 ‘90210’ stars were fashion foes who stole each other’s clothes

The kids from West Beverly Hills High are back — and so is our obsession with the iconic style of “Beverly Hills 90210.” In the pre-internet era, the comely cast were among fashion’s top influencers, inspiring teen fashion trends such as floral baby-doll dresses, midriff-bearing crop tops, and perfectly oversized blazers.

“This was the most influential show I worked on,” costume designer Molly Harris Campbell tells The Post. She came on board during the first season, and later, worked on “The X-Files” and “Charmed.” But she says “90210” was especially fun because the characters all came from fantastically wealthy backgrounds: “They had tremendous disposable income. They [could] wear Calvin and Armani.”

While the style was sharp, she says the elbows on set were even sharper.

Harris Campbell, who as the show’s longest-running costumer stayed with the hit series for five years, says she quickly learned to cover each actress’s clothing rack with a sheet; otherwise, the leading ladies would shamelessly snatch one another’s togs. “They were competitive,” she admits. “They would just shop and go down the racks. Especially Tori [Spelling].”

She laughs thinking back on all the ways that the young stars tried to outshine their castmates, “You never knew who was going to come back from hiatus with a visit from the plastic surgeon,” she says.

Here, Harris Campbell reveals the stories behind the show’s most memorable vintage getups. 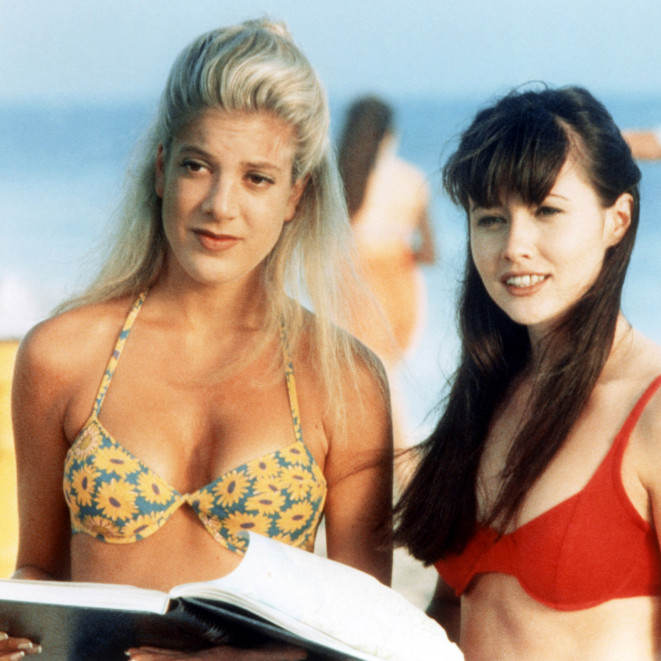 Harris Campbell says that requests for flower-patterned threads — splashy yellow daisy prints and romantic pink roses — came straight from the actresses. “They all had to have floral dresses,” she says of the show’s bloom boom. Luckily, she says she could distinguish between characters, through the cuts and the styling: “Tori [Spelling] wore them short, and Shannen [Doherty] liked hers long, paired with Dr. Martens.”

Jeans were a go-to for the California-cool crew, and Harris Campbell says the stars were opinionated when it came to their favorite pairs. She says Jason Priestly wore Lucky Brand; Luke Perry liked Levi’s. For Brian Austin Green, it was all about Emporio Armani. “We used to get denim at Barneys and Fred Segal,” she says, adding that the famed West Hollywood boutique was especially accommodating: “Fred Segal used to spoil me rotten and keep the store open [late].” 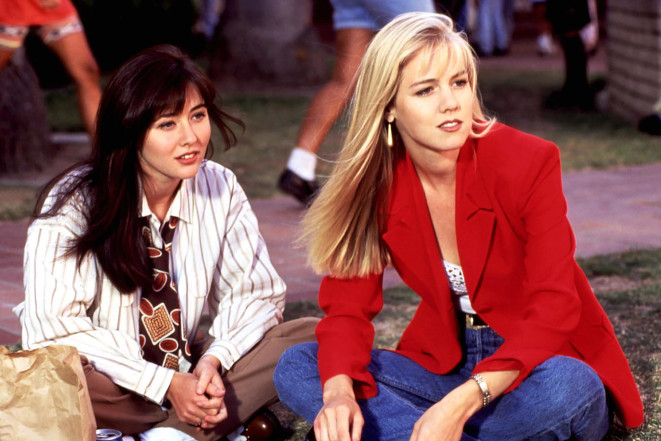 As frenemies Brenda and Kelly, Doherty and Jennie Garth both regularly rocked men’s blazers, but Harris Campbell says that it was especially important that Brenda borrowed from the boys. She wore tailored vests and loose neckties to show off the Minnesota-transplant’s quirky approach to fashion. “We were always trying to find ways to differentiate the characters’ style. Brenda . . . shopped in thrift shops.”

Working with an ensemble cast, Harris Campbell was always trying to balance prints and colors across the entire group. One trick was to put a single character in red, because it naturally commands attention. But after the actresses figured out what was happening, she says they actively competed to be the scarlet woman: “The big joke was who would get to wear the red dress because the viewer’s eye would automatically go there.” 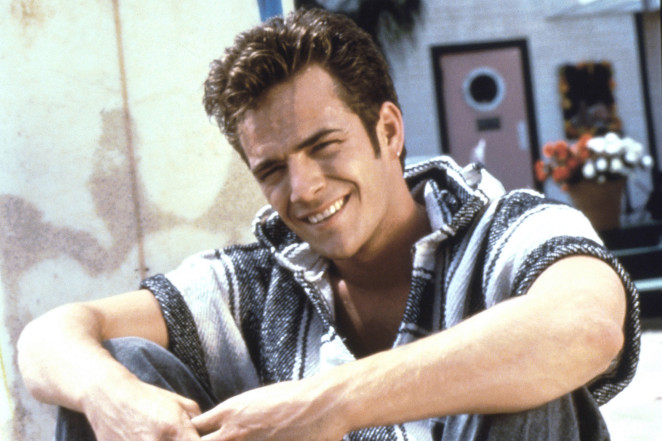 Harris Campbell admits she still has a soft spot for the heartthrob, who passed away at the age 52 in March. She remembers him as “easy to work with . . . he liked what I did.” Because he played a tough guy on screen, she says she bulked up his narrow shoulders in Emporio Armani jackets and bolstered his under-6-foot frame with low-heeled Roper cowboy boots. As for the surf-dude poncho, she says another stylist picked it out, but she loved it. “It was pretty iconic,” she says.