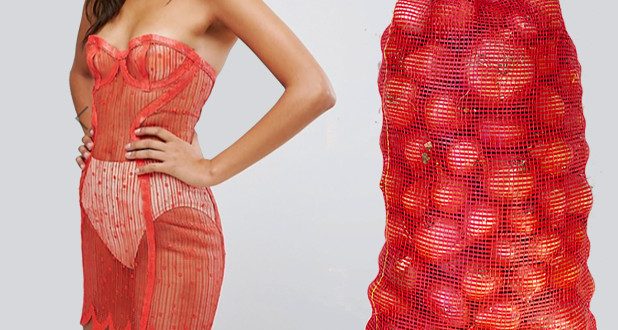 This pricey $553 dress has social media fashion critics making a stink over the transparent red mesh netting that resembles an onion sack.

Currently on sale for $331.50, the Lacetex Slip Dress by designer Elissa Poppy leaves little to the imagination. A woman modeling the 100% latex creation for retailer ASOS’ website pairs it with white underwear and over a white dress-length shirt.

In addition to the strange material, the dress features a corseted back and a textured hemline.

“350 for a dress that looks like onion bag sack,” added Twitter user Jay Sharif, referring to its original price in British Pounds.

Elissa Poppy, an English brand which specializes in handmade “high fashion latex lingerie,” was in fact inspired not by produce sacks but couture in the creation of the dress, according to product details.

This isn’t the first time ASOS has been called out online for fashion faux pas. In January 2018, the retailer removed a listing for a true-to-size belt intended to be wrapped around buyers’ necks following an outcry on Twitter.

Previous Getting Control of High Blood Pressure
Next It’s chic to be an absolute troll, says Moschino